Back in November, we attended the 4th anniversary celebration for Make the Road New Jersey in Elizabeth, NJ.  The staff members of "Make the Road" have been very helpful to our women during the organization's four years of existence, so it was important for us to celebrate with them and to thank them. We thought that the diversity of people representing Passaic at that celebration was so significant, that we took a photo.  In this photo, from left to right, are:  Passaic City Councilman Salim Patel, Sister Gerardine Tantsits, SCC (Administrative Assistant, Passaic Neighborhood Center for Women), Sister Ann Marie Paul, SCC (Director, Passaic Neighborhood Center for Women), and New Jersey State Assemblyman and Passaic City Council President, Gary Schaer.  A closer look at this photo reveals representation of three Abrahamic faiths -- (from left to right) Islam, Christianity and Judaism. 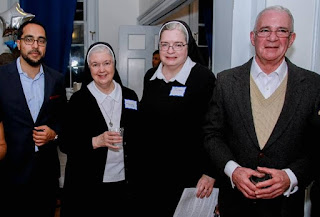 On Sunday, March 17, these same people, and hundreds of others, gathered in Passaic City Hall for an occasion which, while very different from a celebration, most definitely represented Passaic's diversity.

As you know, on Friday, March 15, we woke up to the news that two acts of terrorism were committed at the Al Noor Mosque and the Linwood Islamic Center in Christchurch, New Zealand, during Friday prayer services.  As we heard the news, our thoughts and prayers went immediately to the dead and the injured in New Zealand.  Upon hearing and seeing the increasingly tragic stories from New Zealand, we prayed not only for the victims there, but for our local Muslim brothers and sisters who would be waking up to the same news and who would soon be heading out to Friday prayer themselves.

Here at the Center, our thoughts and prayers turned especially to our neighbors across the street -- the Noble Leadership Academy, a school in Passaic that serves the Islamic community.  We prayed for their protection and we prayed that the parents, faculty, staff and administration would have the strength to guide the young students through this difficult time.

Two days later, we were able to pray WITH our neighbors, as we gathered in Passaic City Hall for an interfaith candlelight vigil organized by Councilman Patel to remember the victims of the attack in New Zealand.  Prayers were offered by representatives of various faith traditions, and several state and local government officials spoke.

At the end of the ceremony, someone suggested that perhaps we could replace the gruesome thoughts and images in our minds with the image of two Sisters -- one Muslim and one Catholic -- embracing.

More photos of the vigil and some of the speakers appear below.  These photos demonstrated clearly that we, though many, are one.  May God continue to bless the City of Passaic and all who minister here!

Posted by Passaic Neighborhood Center for Women at 12:56 PM No comments: