Once again, we had a very good workshop presented by Jose German, of Green Harmony Now, LLC, Sustainable Eco-Friendly Gardening and Landscaping and arranged by Claudia of City Green.  Let's allow the photos and captions to tell the story.  We are grateful to Jose, Claudia, all our gardeners, our Associate Director, Sister Elaine and our garden coordinator, Ann Marie, for making this day possible. 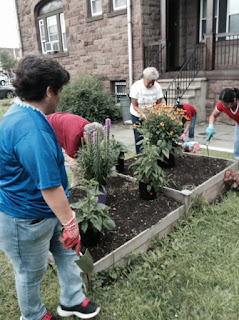 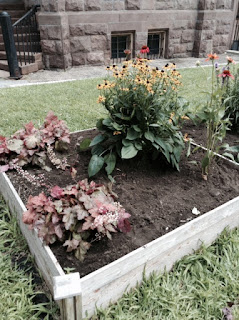 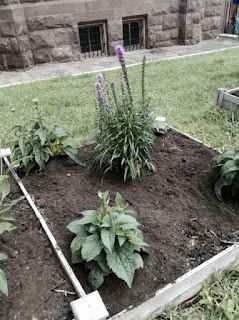 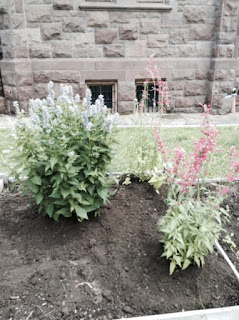 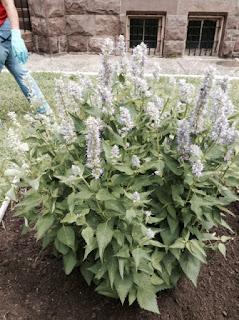 Posted by Passaic Neighborhood Center for Women at 10:09 AM No comments:

Hope for the Flowers

What a surprise we had at the garden workshop on Saturday!  Jose German, our workshop presenter, brought his friend, Trina Paulus, with him.  Those of us who have been around a while (OK, for more than a while) might recognize Trina as the author and illustrator of Hope for the Flowers.  Originally written in 1972, Hope is described as "a tale -- partly about life, partly about revolution and lots about hope for adults and others (including caterpillars who can read)."  It is alternately described as "a different sort of book for everyone except those who have given up completely (and even they might secretly enjoy it)."

If Hope for the Flowers is new to you, read it!  We won't spoil it for you by telling you the story here.  Suffice it to say that you will enjoy the adventures of "Stripe" and "Yellow" as countless others have in the 40+ years since Hope was first published.

Before you run out to the bookstore to purchase your copy (or while you're waiting for its delivery after your online order), enjoy these photos of Trina and the books she so graciously donated to the Passaic Neighborhood Center for Women -- one in English, one in Spanish, both autographed by the author! 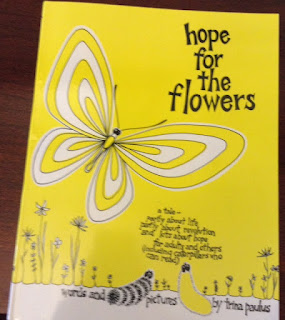 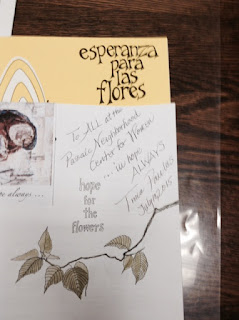 Posted by Passaic Neighborhood Center for Women at 4:58 AM No comments:

We had a great garden workshop on Saturday, focusing on native flowers.  We are grateful to Claudia and Jose for the time, effort and energy they brought (and always bring) to the Passaic Neighborhood Center for Women.  This workshop will be the subject of several of our blog posts this week.  Stay tuned!

In the meantime, many of you have asked the same question.  The answer is, "Yes, the weeds are gone."  The "before" and "after" images are below.

So, what happens when the weeds, virtuous as they are, give way?  Beauty of another kind!

Reflect: Right now, do I need the beauty of the weeds, growing wild where they are, knowing no boundaries, and being watered only by the rain?  Or do I need the structure, care, and watering that the newly-planted flowers require?  Indeed, both are beautiful. But we must choose the beauty we need right now -- that is, the beauty God wants to share with us right now -- and gratefully pray toward the acceptance and nurturing of that beauty.

Posted by Passaic Neighborhood Center for Women at 10:30 AM No comments:

The Virtues of Weeds 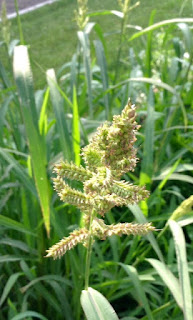 According to Ralph Waldo Emerson a weed is “a plant whose virtues have not yet been discovered.”  If Emerson were to look at the back yard of the Passaic Neighborhood Center for Women today, he would see the potential for the discovery of much virtue.  In our “old” raised garden beds from last year, in which we have not yet planted flowers, there are weeds of all sizes and shapes.  These weeds popped up during the last few weeks when there has been the right combination of sunshine and rain.

As the weeds began to appear, I thought, “We’ll have to get rid of them before our July 18 workshop when we’re planting flowers in these beds.”  As they grew larger, I thought, “I don’t have the time and energy to deal with these weeds.”  Recently, I thought, "I'll tolerate them or pretend they are not there."  After all, these weeds do not interfere with our new vegetable garden which was planted on May 15.  Those ten, newly-constructed, raised beds – safely ensconced on the other side of the church building – are brimming with tomatoes, corn, lettuce, eggplant, kale and other plants. So, why should I pay any attention at all to these weeds?

Because they are beautiful!

When I finally stopped ignoring and tolerating the weeds, I discovered the grace and beauty of their flowing leaves and upright flowers, swaying in the summer breeze and glistening in the noonday sun (see photo above).  When I really paid attention to their grace and beauty, I began to recognize the weeds as beautiful gifts from God.

Reflecting on my encounters with these weeds reminds me to pay attention to my encounters with others, especially those whose grace and beauty might not be abundantly apparent to me at first – that is, those whose virtues I have not yet discovered.  When I think, "These weeds would be nice if they weren't getting in the way of our planting," or "I don't have the time or energy for these weeds," I am missing an opportunity to encounter them just as they are in their current situation. When I walk past these flower beds without a second look, I am missing an encounter with beauty in that particular time and place.

However, I am missing out on something much greater when I perceive the people I meet throughout the day as obstacles or energy thieves, or when I walk past someone without greeting them.  When I fail to see the beauty of the people I encounter, I tragically fail to recognize some of  God's most beautiful gifts -- human beings giving and receiving love.

So, what can weeds teach us?  That when we lovingly encounter a person just as he or she is right now, it can be grace-filled and beautiful!  Rather than seeing someone as a present annoyance or a future obstacle, can we realize that we only have the current encounter with this person?  Can we move beyond merely tolerating to encountering -- really encountering -- this person and recognizing him or her as one of God’s many gifts?  Can we move toward loving and being loved in whatever situation we find ourselves?

If we have difficulties doing this, perhaps we need to spend more time discovering the virtues of weeds!
Posted by Passaic Neighborhood Center for Women at 8:43 AM No comments: