Today, We Are Two!

Believe it or not, today is the second anniversary of the Passaic Neighborhood Center for Women! Since September 24, 2013, we have seen more than 2,500 visits from our women.  At moments like these, we are at a loss for words, so we will just say -- again and again -- THANK YOU!  To our bishop and diocesan staff, to our collaborating religious communities, to our staff and volunteers, to our benefactors, especially Partners in Faith donors, to our neighborhood pastors and parishioners and to the women who make themselves at home at the Center -- THANK YOU, THANK YOU, THANK YOU!


Reminder:  SAVE THE DATE: On Tuesday, November 10 from 11 am until 1 pm, our quilters will be selling their homemade Christmas and other holiday items.  They are working feverishly to complete their work and it's beautiful.  Hope that you can make it!

Posted by Passaic Neighborhood Center for Women at 8:31 AM No comments:

Sunflowers, Squirrels, God and Us

We grew beautiful sunflowers at the convent this year, directly in the front of the house for everyone who walked or drove down the street to enjoy.  They really were beautiful . . . until the squirrels got to them.  We had already put a mesh fence around the vegetable garden so that the squirrels would not have a daily, all-you-can-eat buffet at our expense.  The fence was successful, but we did not see a need to fence in the sunflowers.  Hence, this photo: 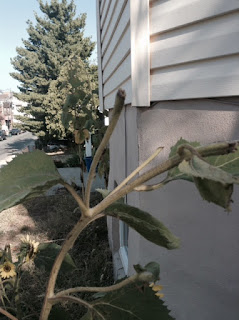 Indeed, what you see in the photo is a strong sunflower stem with the flowers missing, having been eaten by the squirrels.  How do we know that the squirrels were the culprits?  Because every time we rounded the corner of the house, the stems of the sunflowers were bent over due to the weight of the animals whose faces were buried deep in the center of the flower.  Seeing us, the squirrels would scurry off to await our departure, so they could return to their task.

As a result, we decided to let the squirrels win this one.  "If they want the sunflowers, let them have them," we thought, "We'll make them squirrel-proof next year."  So, we stopped caring for the sunflowers -- no water, no weeding, no watchful eyes.  The squirrels finished their looting of the sunflower garden and we moved on, considering how next year's planting would be different.  End of story . . . or so you would think.

Instead, let these photos tell you what really happened: 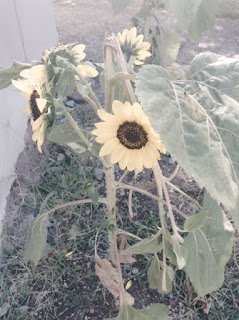 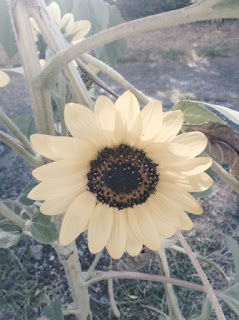 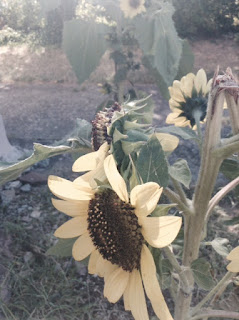 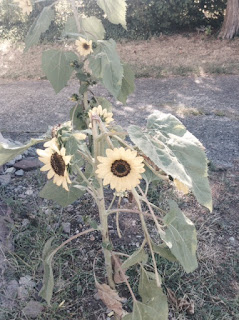 When robbed of their flowers and the uppermost parts of their stems, the flowers continued to grow -- without extra water or care.  In fact, the removal of their largest flowers seems to have given the plants' smaller flowers a chance to grow faster and more abundantly.  Further, the flowers are just high enough off the ground and their branches are just delicate enough that the squirrels are unable to attack -- although it doesn't stop them from trying.  So, instead of a well-tended garden that appears ridiculously barren of flowers, we have a seemingly untended garden of abundant sunflowers.

The incident of the squirrels and the sunflowers has caused us to reflect on our ability to trust in God's providential care in our lives.  Consider their lessons:

Today, most sunflowers in our region are giving way to the flowers of autumn.  While we look forward to the beauty of autumnal hues, we cannot forget the lessons that the sunflowers -- and, yes, even the squirrels -- of 2015 taught us.  As long as we remain open to these lessons, the results will be beautiful!
Posted by Passaic Neighborhood Center for Women at 2:55 PM No comments:

The Center in "New Dimensions"

Thank you, Sisters of Charity, for including the Passaic Neighborhood Center for Women in the latest issue of your publication, New Dimensions.  The Center is included in this publication because we have again received a Sister of Charity Ministry Grant.  This year's grant allows us to purchase software to enhance the opportunities for our women to learn English.  Click here to read the article (on page 7).
Posted by Passaic Neighborhood Center for Women at 9:07 AM No comments: 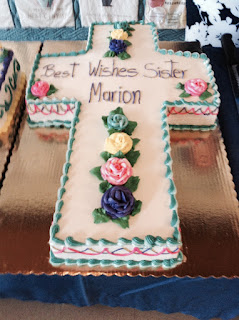 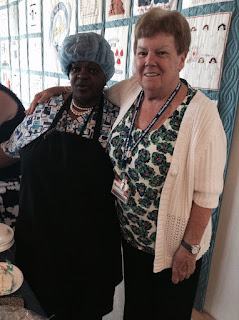 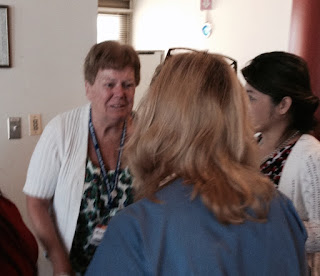 Sister of Charity Marion Scranton, Vice-President of Mission Effectiveness at St. Mary's General Hospital, Passaic, retired on Tuesday after more than 20 years of service to the people of Passaic. Certainly, we wish her well.  But more than that, we offer her our heartfelt gratitude for the part she has played in the successes of the Passaic Neighborhood Center for Women during the past three years. (Yes, the Center has only been open for two years, but Sister Marion's involvement predates the Center's opening.)  In 2012, when the sub-committee of religious superiors was looking for a site for the Center, it was Sister Marion who suggested the former rectory of St. Nicholas parish, our current location.  Once a director was on site, Sister Marion collaborated and networked ceaselessly on the Center's behalf and referred many women to the Center.  She made the resources of the Community Health Education Department fully available to the Center, which has benefited from the tireless help of Sister Anne Moroney, SC, Director, and Luz Flores, Outreach Assistant.

At a ceremony on Tuesday, Edward Condit, St. Mary's CEO, extended gratitude to Sister Marion for her years of service. Additionally, many St. Mary's co-workers testified to the difference Sister Marion has made in their lives, the lives of their families and to the "life" of the organization.

While Sister Marion has promised to remain in touch with those of us in Passaic, we will miss her daily presence.  We offer her our heartfelt gratitude and prayers.

God bless you and your future endeavors, Sister Marion!
Posted by Passaic Neighborhood Center for Women at 6:15 PM No comments: