What Day is It?

You are most likely aware of Black Friday, Small Business Saturday and Cyber Monday.  For the past four years, Giving Tuesday has been added to the list.  According to its website, Giving Tuesday is "a global day of giving fueled by the power of social media and collaboration.  Observed on the Tuesday following Thanksgiving (in the U.S.) . . . Giving Tuesday kicks off the charitable season, when many focus on their holiday and end-of-year giving."

This year, giving Tuesday occurs on December 1.  There are several ways to help the Passaic Neighborhood Center for Women, should this be how you choose to spend your Giving Tuesday (or any "giving day" thereafter):


If you can help with any of these requests -- whether on "Giving Tuesday" or during the rest of the year, please contact Sister Ann Marie at the Center -- (973) 470-0844 or sam@patersondiocese.org. Thank you and God bless you for your generosity in considering these requests.
Posted by Passaic Neighborhood Center for Women at 10:24 PM No comments:

The Center in the Beacon

Thank you to reporter, Cecile San Agustin, editor Rich Sokerka, and everyone at The Beacon (newspaper of the Diocese of Paterson, NJ) for their coverage of our Christmas Boutique.  Click here to be directed to the Digital Edition.  The article is on page 5.
Posted by Passaic Neighborhood Center for Women at 9:35 AM No comments:

On this Thanksgiving 2015, we are grateful for the support of Bishop Serratelli and everyone in the Diocese of Paterson.  We are grateful to the religious communities whose spirit of collaboration and prayerful, material and human resources enable us to open our doors each day.  We are grateful to our staff, whose untiring love of the women of Passaic bears fruit each day.  We are grateful for the women who continue to meet, share and grow at the Passaic Neighborhood Center for Women.  Thank you and God bless you!  Happy Thanksgiving!
Posted by Passaic Neighborhood Center for Women at 8:30 PM No comments:

Give Thanks: All are Welcome

The homilist will be Sister of Christian Charity Ann Marie Paul, director of the Passaic Neighborhood Center for Women.

Mayor Alex Blanco of Passaic will be present and will extend the greetings of the Passaic community to those attending.

The theme of the service is “Blessed are the merciful” relating to the Year of Mercy proclaimed by Pope Francis to extend from Dec. 8, to Nov. 22, 2016.

The ecumenical choir comprised of members of the Passaic churches will lead the congregation in song.

All those who attend are asked to bring an offering of non-perishable food items to be distributed to the needy of the Passaic area.

Refreshments will be served at a social in the Church Hall after the service All are invited to attend.
Posted by Passaic Neighborhood Center for Women at 7:18 AM No comments: 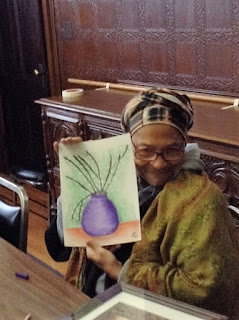 She would like that this post is being written about her.  In fact, she would be thrilled!  From the day we opened our doors in September 2013, she had been one of the most enthusiastic women to visit the Center.

Her sense of style -- it would be an understatement to call it "unique" -- pervaded her creations in art class.  Her searches on the Internet -- that is, once she learned how to search the Internet -- were driven by her seemingly unquenchable thirst for knowledge. 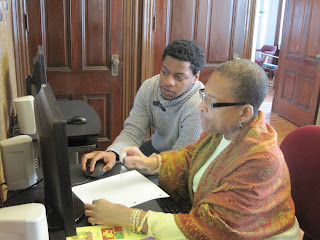 Her proudest moments at the Center were spent in the garden.  Growing the vegetables that she used to feed her family made her so happy.  She watered the garden every day, sometimes twice a day during the hottest days of the summer.

During the first year of our garden, she pointed out repeatedly that the garden was too small and that each woman should have her own garden bed.  When we did this in the second year, she claimed to have been singlehandedly repsonsible for it, and that was fine with us.

Her favorite vegetable to grow was kale, because she heard it was one of the healthiest vegetables to eat.  To be sure that she was growing and harvesting it properly she watched video after video on YouTube, shouting out her new learning to anyone who would listen.

Speaking of shouting:  If she was walking up State St., riding on a bus near the Center, or talking to someone else nearby she would make sure to get our attention when she saw one of us.

"I'll be over in a minute to use the computer."

"Did you see that kale?"

"Do you think those tomatoes are ready to pick?"

"Can you help me find directions on Mapquest?"

She "had been through a lot" in her life, she said.  That made her tenacious in just about every way.  She would not accept answers to questions unless she understood every bit of the explanation.  She was the epitome of a "life-long learner."

She loved life and was especially attuned to those people society tends to ignore, especially the elderly.  She couldn't attend morning classes because of her work at the Senior Center.  She was frequently requested as a home health aide to the elderly.

She would have been 58 years old today.  Had she been at the Center, we would have sung to her with lit candles on cupcakes.  She would have asked for extra cupcakes to take home to her sons or to neighbors who rarely got cupcakes.

Instead, today we mourn her loss, secure in the knowledge that heaven will soon abound in different varieties of kale.  If God argues that it's taking up too much room, God will lose the argument (and possibly be forced to drink a kale smoothie).

Rest in peace, dear friend!  Thanks for keeping us on our toes. We love you and we will miss you greatly.  The Passaic Neighborhood Center for Women is a better place because you graced it with your presence.

Posted by Passaic Neighborhood Center for Women at 3:29 AM No comments:

If you were unable to come to the Christmas Boutique on Tuesday or if you came and wish you would have picked up one more item, you are in luck!  We have a few table runners (for $40) and bottle covers (for $10) remaining.  See the photos below for a sampling.  If you'd like to buy any of these or if you have a question about our remaining inventory, contact Sister Ann Marie (sam@patersondiocese.org or (973) 470-0844).  As always, thank you for your support! 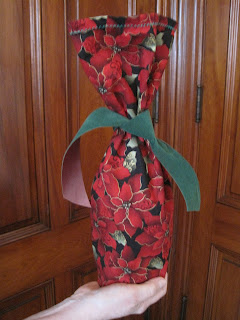 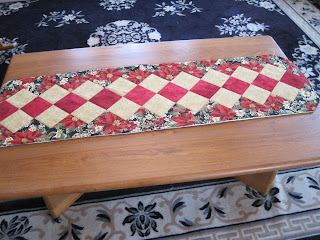 Posted by Passaic Neighborhood Center for Women at 5:00 PM No comments:

Thank you to our outstanding benefactors!

The Passaic Neighborhood Center for Women continues to serve the women of Passaic largely because of the generosity of our benefactors.  On Tuesday at our first-ever Christmas Boutique and Art Show, our benefactors came through again.  Thank you to everyone who came and who bought our women's beautiful handmade items. We are so very grateful to Sisters of Charity Patricia Reynolds (Quilting) and Mary Culhane (Art) for their loving guidance and instruction of our women.  Here are some photos of the day. 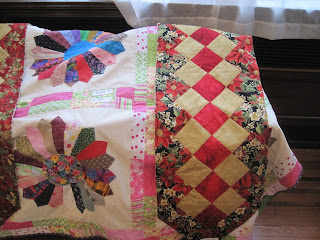 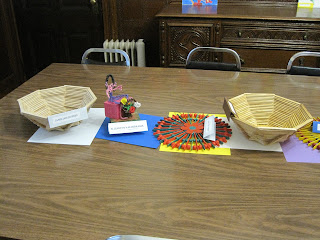 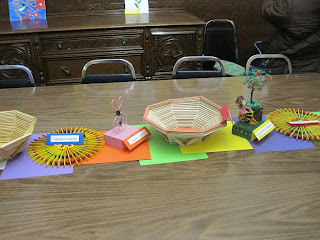 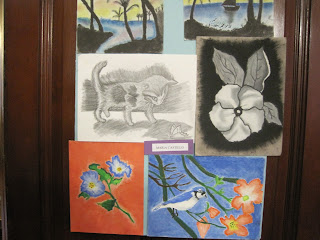 Posted by Passaic Neighborhood Center for Women at 3:42 PM No comments:

Reminder: Christmas Boutique in One Week!

We hope you are planning to join us next Tuesday, November 10, for our first-ever Christmas boutique between 11 am and 1 pm.  Our quilters have many handmade holiday items available for (cash only) purchase.  Click here to be reminded of the details and to view the flyer for the event.
Posted by Passaic Neighborhood Center for Women at 7:01 AM No comments: