Logging In and Listening Mercifully 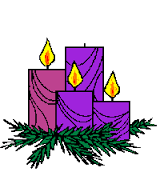 During this Advent season, I am listening to Facebook.  What, exactly, does this mean?   Each year during Lent, I shut down my Facebook accounts.  But during Advent, I keep them open and view their content without posting, replying to or “liking” anything.  During Advent, I simply log in and listen.
Today, as we light the third candle on the Advent wreath,  I am taking time to reflect on the effect that this practice of "logging in and listening"  has had on my life.  During Advent last year, I read about what was going on in the world of my friends and family and found it annoying to be unable to let them know I saw their posts.  In fact, I would email or text people to let them know that I had seen what they had posted, but that I couldn’t reply because of my Advent practice of not replying.  “But,” some would ask, “Isn’t texting or emailing defeating the purpose of the practice?”  Of course it is!  But I am always a work in progress!
However, this year is different.  This year I have not only not replied outside of Facebook, but my online practice of listening has also spilled over to other aspects of my life.  I find myself making the effort to listen to my Sisters, friends and family in order to hear what they are actually saying rather than attempting to formulate a quick reply or suggest a potential outcome based on something I only half-heard.  While I have not perfected my listening skills (and probably never will), this practice has made a world of difference for me this Advent.
So, what made this year different from last year?  In a word, mercy!  Since October, I have been sharing reflections and giving retreats about mercy in anticipation of the Jubilee of Mercy that opened on December 8.  My preparation for these events has been steeped in Scripture, Pope Francis, Walter Kasper and Pauline von Mallinckrodt.
I have reflected deeply on the Parable of the Lost (or “Prodigal”) Son and his merciful father (Luke 15:11-32).  I have delved into Misericordia Vultus, the letter of Pope Francis introducing the Jubilee of Mercy.  I have read Walter Kasper’s Mercy: The Essence of the Gospel and the Key to Christian Life.  I have pondered the extensive writings and letters of Blessed Pauline, the founder of the Sisters of Christian Charity.  Indeed, I have been drinking deeply from the well of mercy – and it has made a difference.
What have I learned and (hopefully) shared as a result?
·      From Luke 15: Be merciful like the father:  When someone has done something worthy of punishment, mercy makes it possible for both the wrongdoer and the wronged to retain their human dignity.
·      From Pope Francis (via Pope John XXIII): In all situations attempt to apply the medicine of mercy rather than the medicine of severity.
·      From Walter Kasper:  Mercy is so very necessary in this world in which violence and terrorism are increasing.  “We must be silent about God if we do not know how to speak anew the message of God’s mercy to people who are in so much physical and spiritual distress.”
·      From Blessed Pauline: “[We must have] a merciful heart to compassionate all, a charitable tongue to excuse all, a meek and patient disposition to bear with all.”
While my "Facebook learnings" do not seem to figure into any of these “mercy learnings,” they are, indeed, related:  Only when we first suspend our need to reply quickly or to offer swift solutions can we then begin to respond to others from a place of mercy.
Dear friends of the Passaic Neighborhood Center for Women:  As we prepare the way of the Lord for the remainder of Advent 2015, let us "log in" to our lives in a way that is steeped in listening deeply and responding mercifully.
Thank you for all you are and all you do for and with us!
Sr. Ann Marie 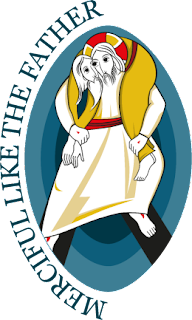 Posted by Passaic Neighborhood Center for Women at 3:09 PM No comments:

What an exciting day!

As you know, all proceeds from our Christmas Boutique on November 10 went to the quilters who made the items.  These women used the money from the sale to purchase their own, brand new sewing machines.  The excitement today was palpable as the machines were delivered.  Look at the smiles on their faces in these photos as Sr. Pat Reynolds, SC shows them some of the 50 stitches that are possible with their new machines!

We are grateful to all our benefactors and staff who made this a reality for our women.

Thank you and God bless you! 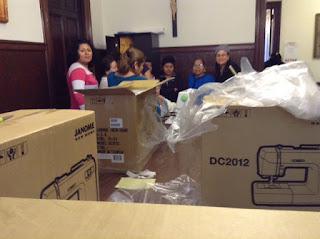 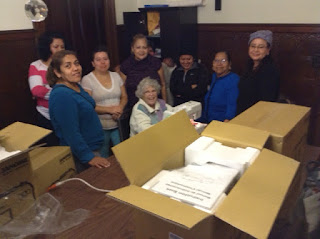 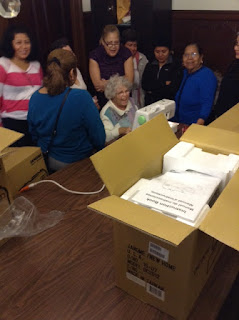 Posted by Passaic Neighborhood Center for Women at 4:49 PM No comments: