From Taiwan to Passaic

You will recall back in October (see this post) that our crocheters made eyeglass/cell phone cases that were taken to the General Chapter of the Missionary Sisters of the Immaculate Conception of the Mother of God (SMIC) in Taiwan.  Now, we are able to show photos from Taiwan of the delegates and leadership with their cases!  Thanks to Sister Eleanor and Sister Joanne for making these photos possible.  We also thank all of the SMICs (all over the world!) for their consistent support of the Passaic Neighborhood Center for Women.

(As a side note, in the first photo below, second from left, you'll see Sister Johanna Ndjaula, SMIC, who is a graduate of Assumption College for Sisters (ACS), a sponsored work of the Sisters of Christian Charity (SCC).  What a wonderful thing!  A photo taken of SMICs in Taiwan with a SMIC from Namibia, who was taught by the SCCs in Mendham, NJ!) 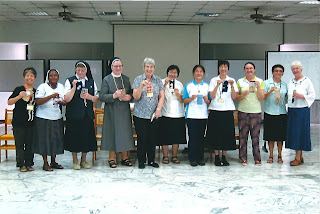 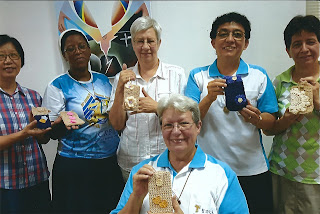 Posted by Passaic Neighborhood Center for Women at 12:03 PM